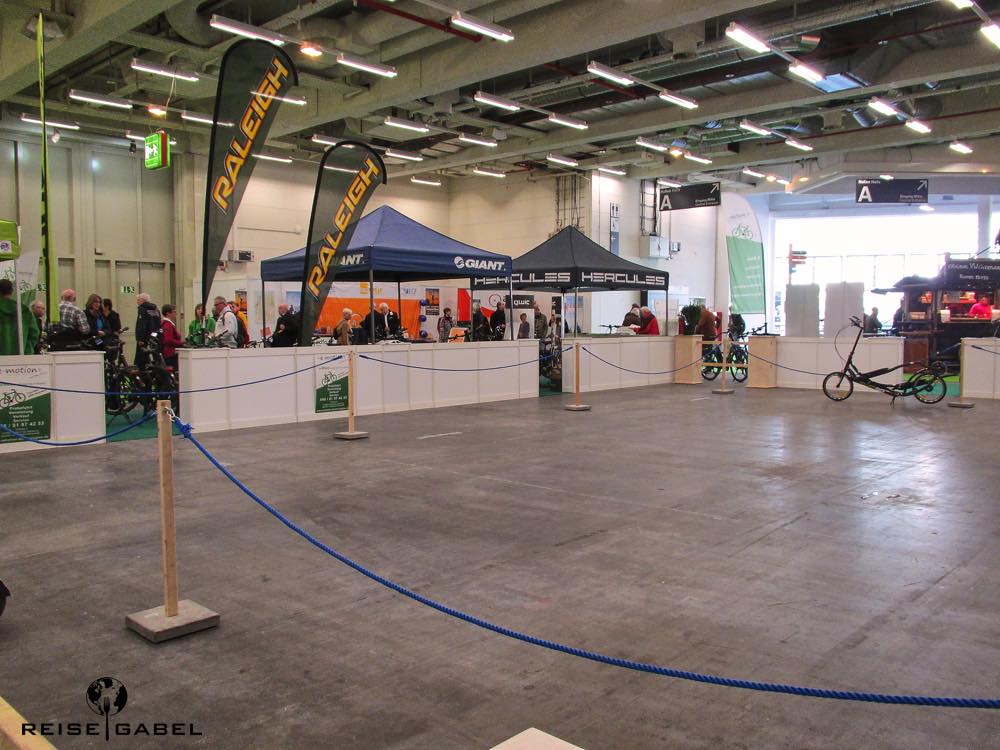 Oasis of the Seas – My Conclusion

Relaxed cruising or mass tourism on the Oasis of the Seas?

The Oasis of the Seas was already longer a dream. I’ve always wanted to go on this great ship, even though I was skeptical because it is maybe too crowded.

But even already after the half cruise it was clear to me that it will not be my last. The size of the ship and the many things to do on board is more of an advantage for me.
You can do so much and there are so many different restaurants to visit as on no other ship. You forget about all the people, because there are so many quiet corners aboard the Oasis of the Seas.

I highly recommend it.

In any case you should visit all the shows that are all on a incredibly high level.

Who likes to eat, should invest the extra dollars and visit the specialty restaurants. For the special evening definitely the 150 Central Park. In a quiet, relaxed atmosphere with great food, the Solarium Bistro on an evening is a good choice.

We had a balcony cabin with a view of the Central Park. Who wants it quiet should be tae a cabin with sea view. The kids and music from the pool is unfortunately quite noisy.

Sure, on such a big ship it’s mass tourism, but there is enough space to make himself his own little dream vacation. 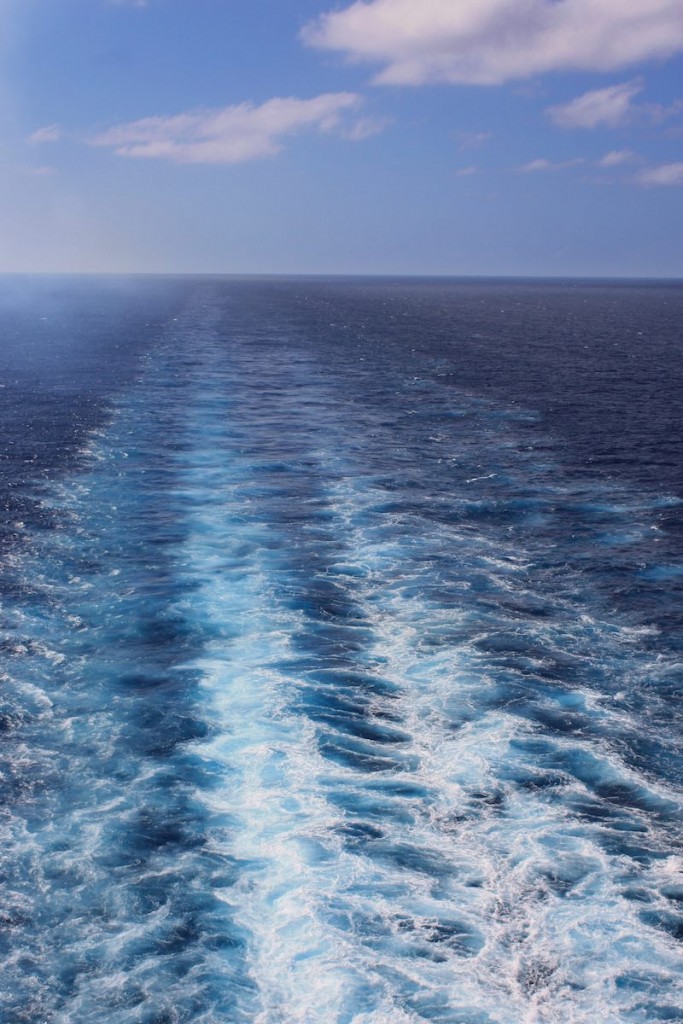 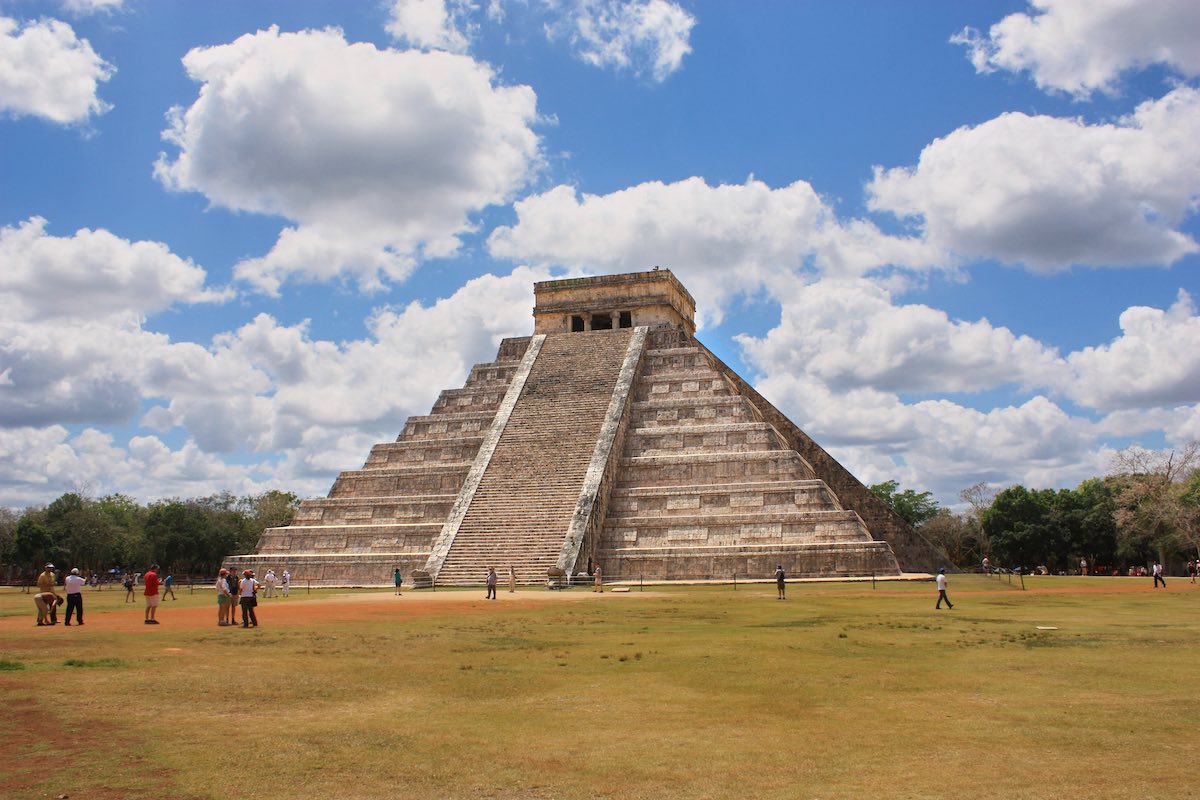 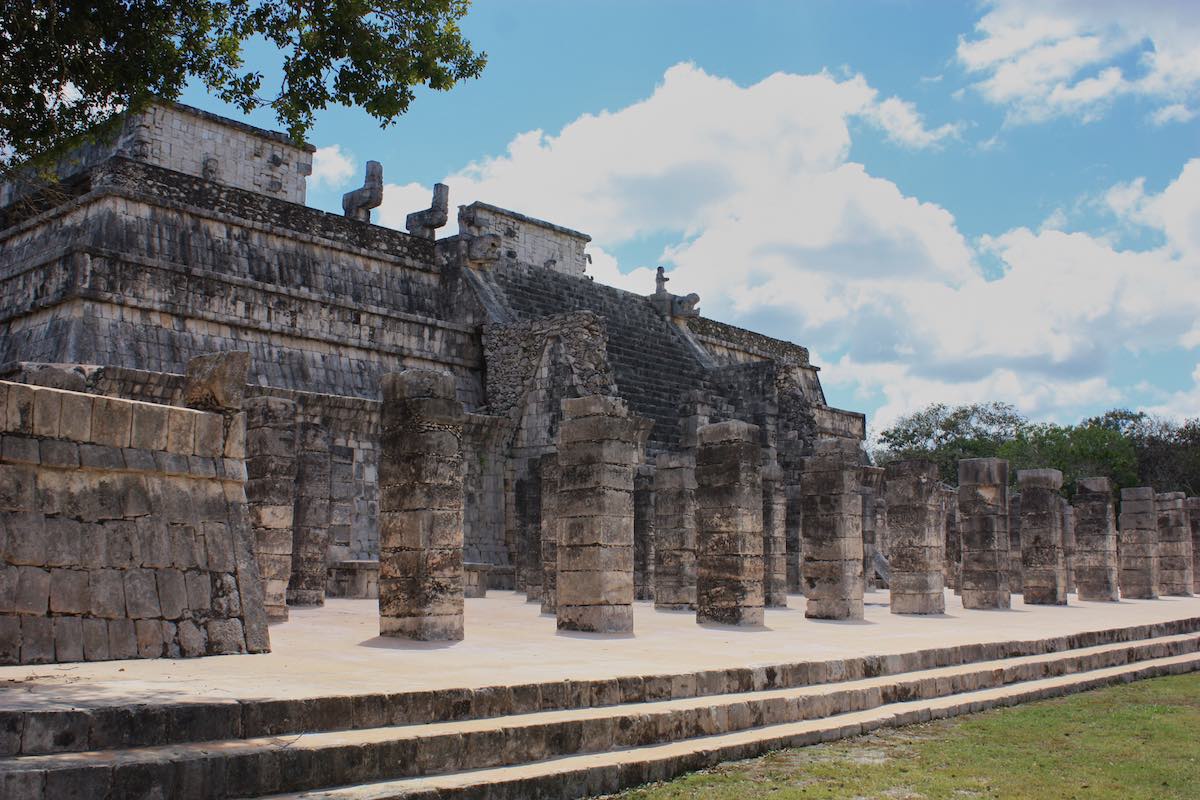 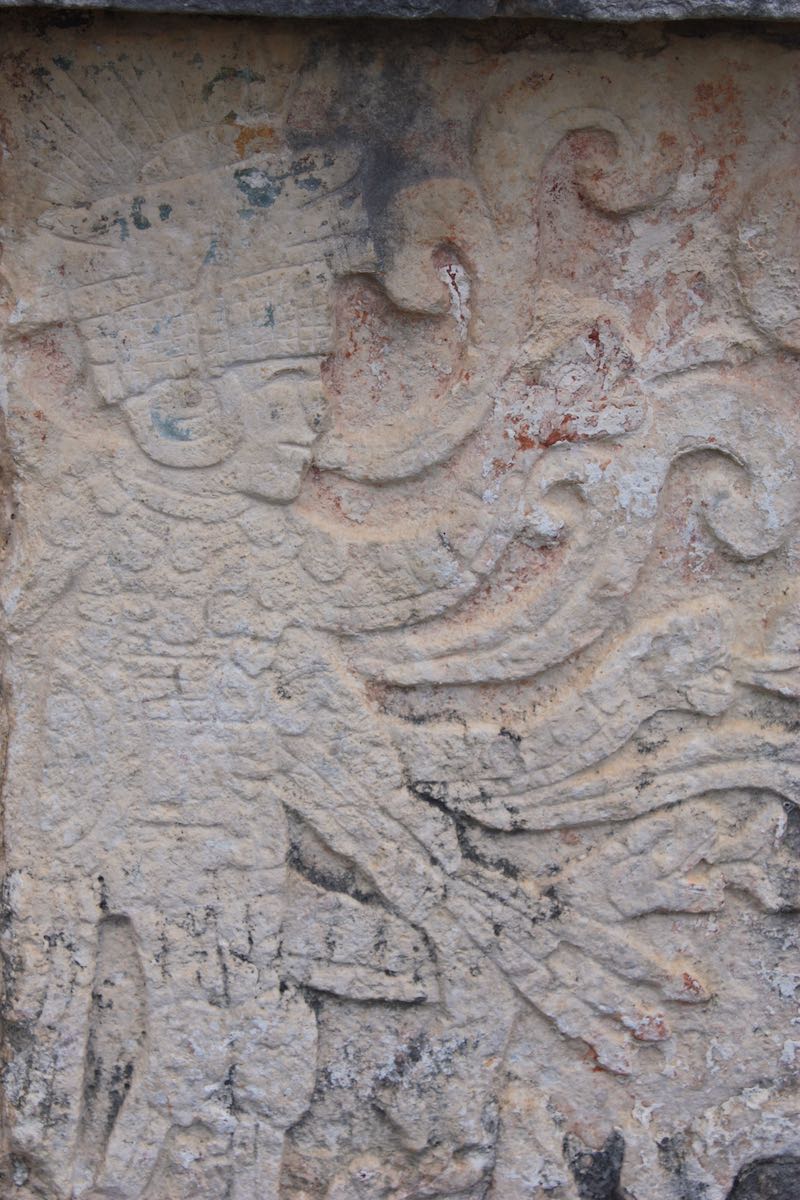 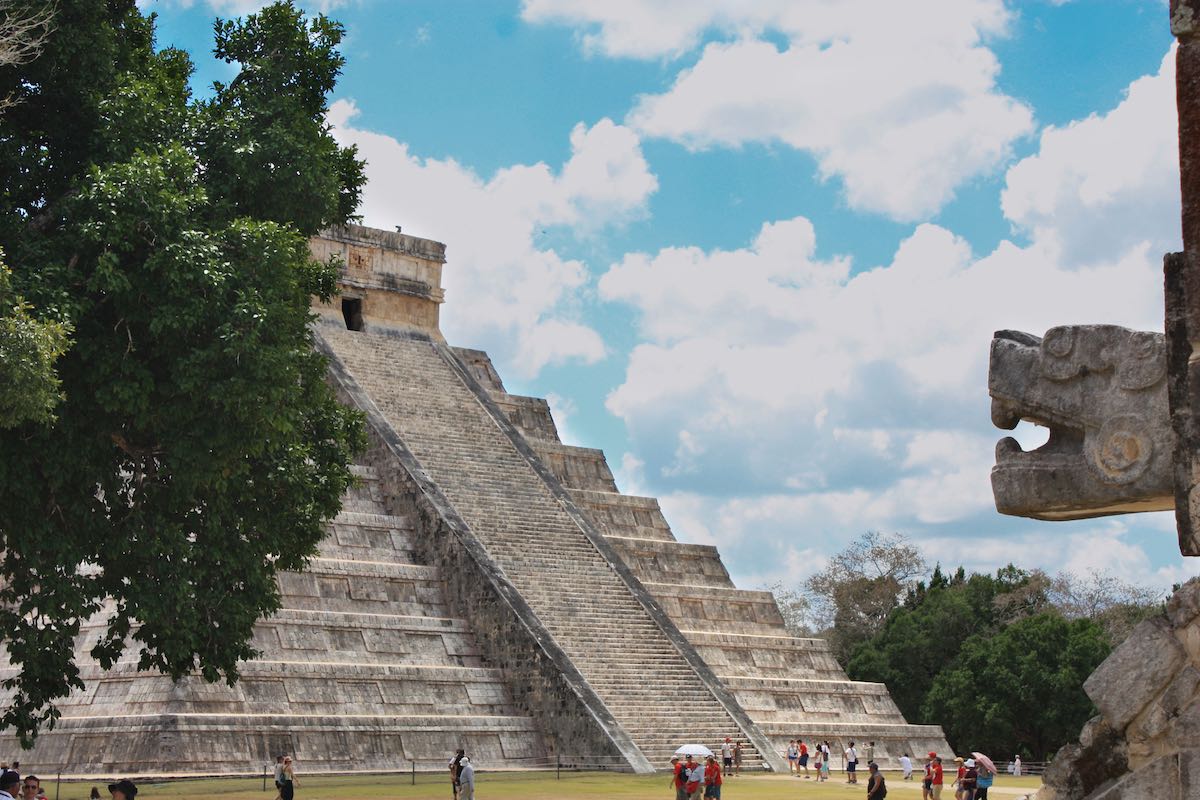 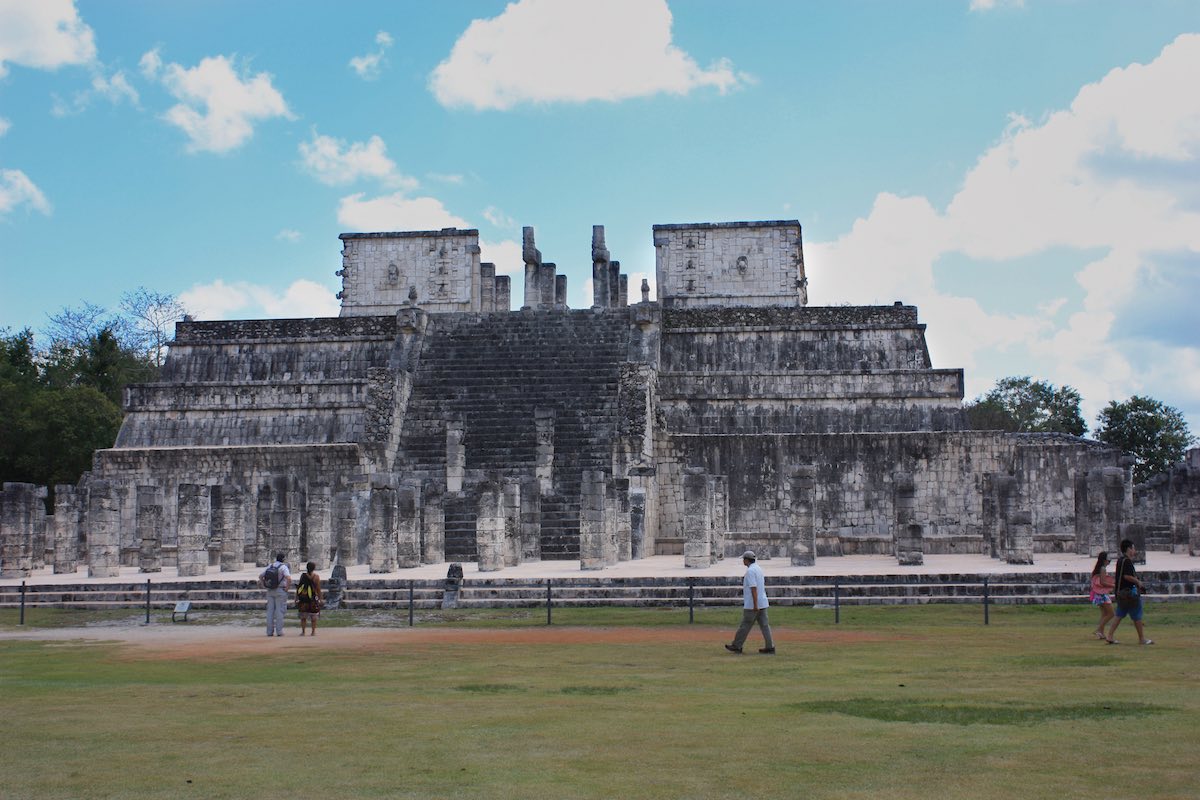 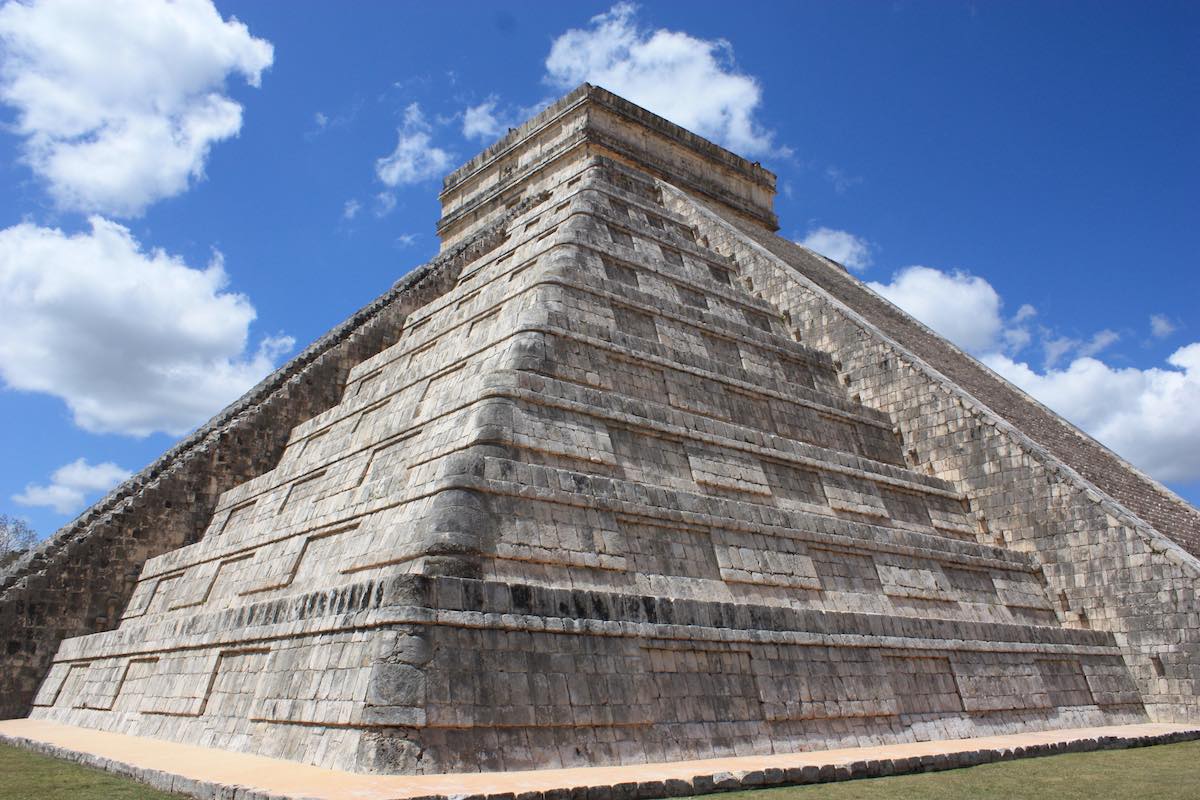 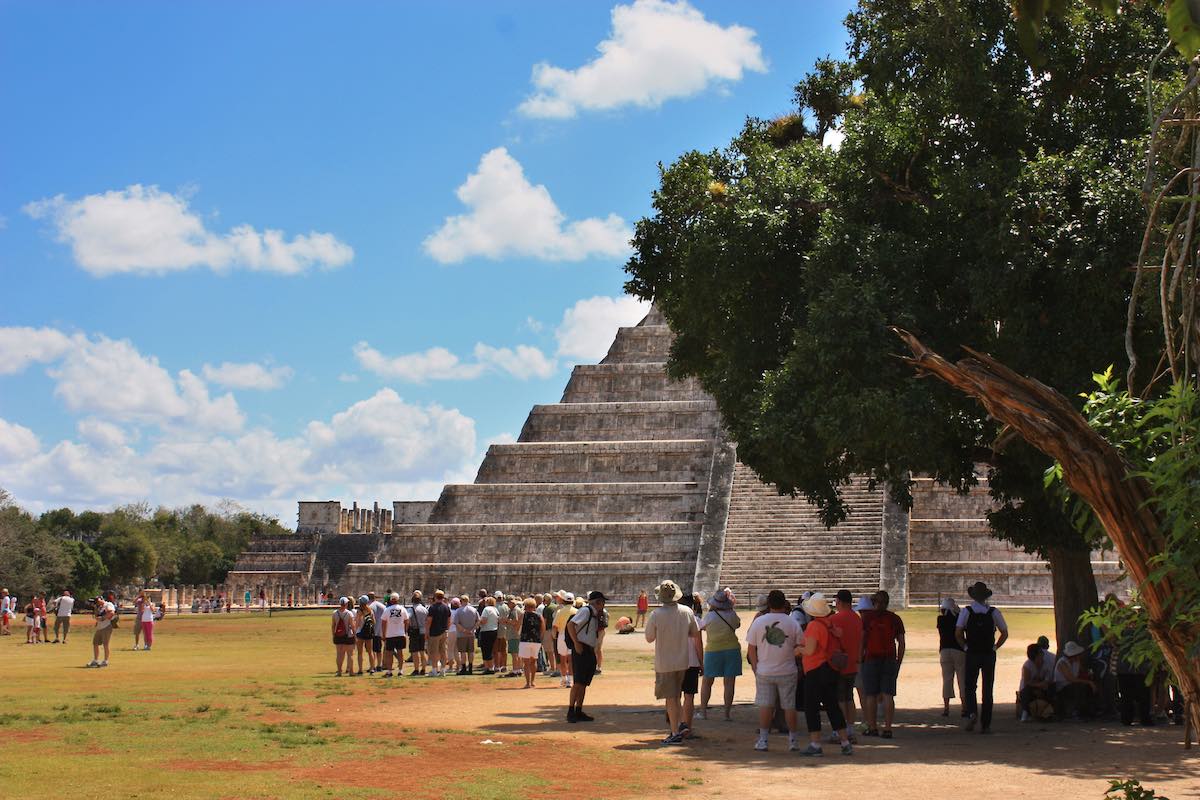 Falmouth in Jamaica with the Oasis of the Seas

What to do in Falmouth in Jamaica? Sightseeing, shopping or swimming?

Falmouth in Jamaica has again countless ways to make your day. Royal Caribbean offers a wide range of various trips. You can go shopping directly in front of the ship. Some offers for food and drinks there as well. 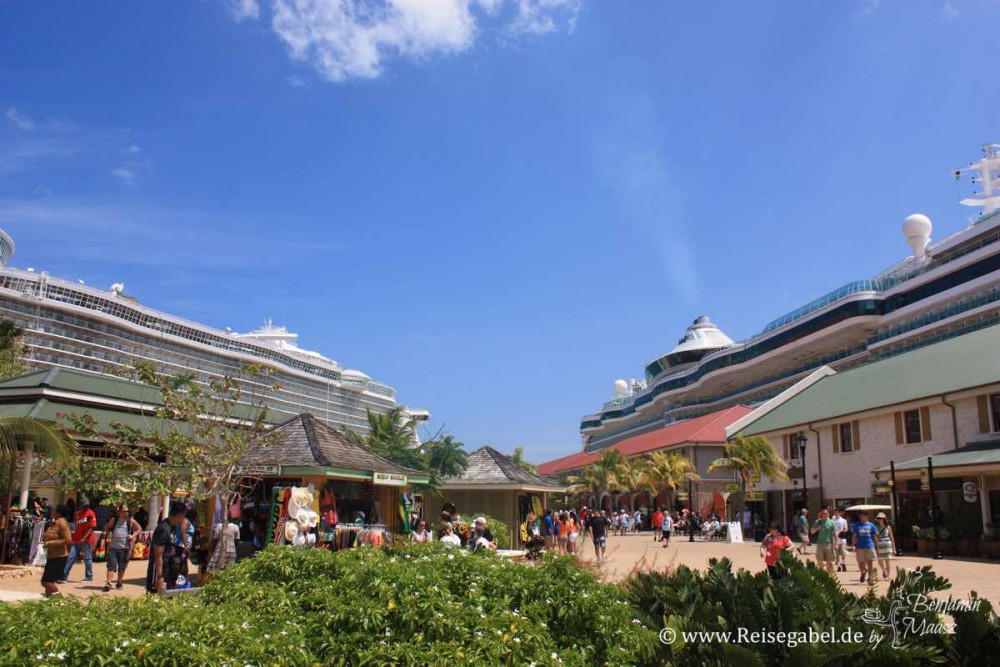 A great tour is certainly the climb to the waterfalls, but we were there before. Thus, we have opted for a little tour to see something of the island. We went in a minibus through the city. The first stop was at a church, and there the pastor told a bit about the history of Jamaica and Falmouth. Then we visited a kindergarten. For some, it was frightening how the children spent the day there. We thought it is not considered as bad. We knew that it is not the western standard, and in some corners of the world it is much worse.

The last stop was out of town in an old sugar plantation. There we were told something about the history and eat some local snacks. Even a rum punch for everyone, where it was more rum than juice;-)

After that the 3 hour round trip was finished and we went back to the ship.

My conclusion: Who wants to make at least a little trip to see something of the country. I can highly recommend this tour.

The seven major areas on the Oasis of the Seas

Royal Caribbean has divided the Oasis of the Seas into seven major areas. These 7 “Neighborhoods” advertises Royal Caribbean, but thats are not nearly all the areas on board. There is still much more to Discover.
The 7 areas: 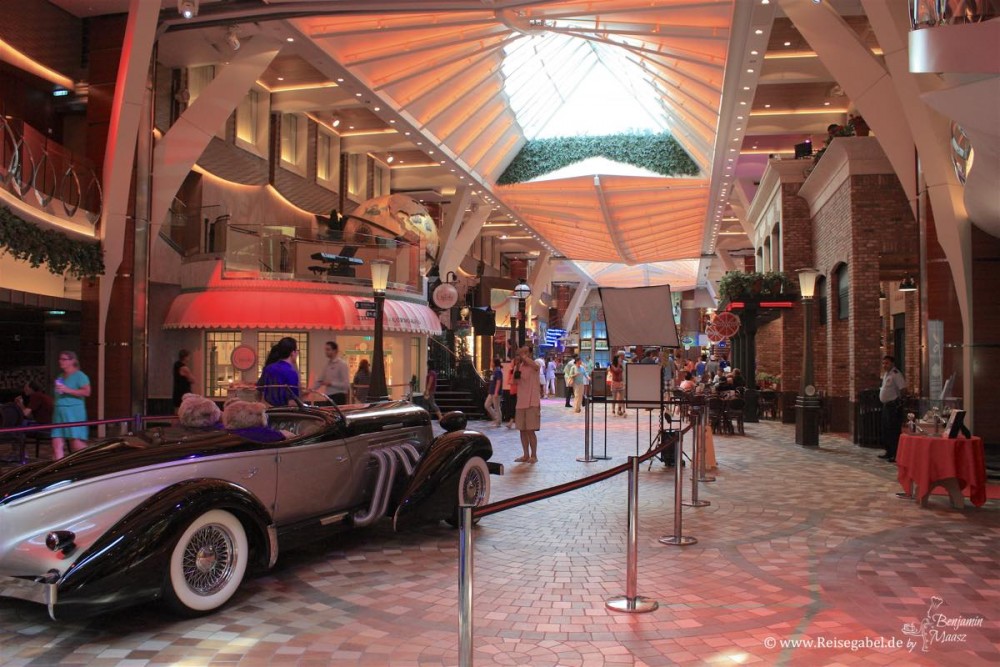 The Boardwalk is located on deck 6 in the rear section of the ship. The area is not covered, it is surrounded on two sides by balconies, the so-called balcony cabins overlooking the Boardwalk. At the rear end of the ship and the boardwalk, is the Aqua Theater located. On the boardwalk you can enjoy shopping, ice and donuts, drive carousel and dine in the restaurant Seafood Shack or Jonny Rockets. 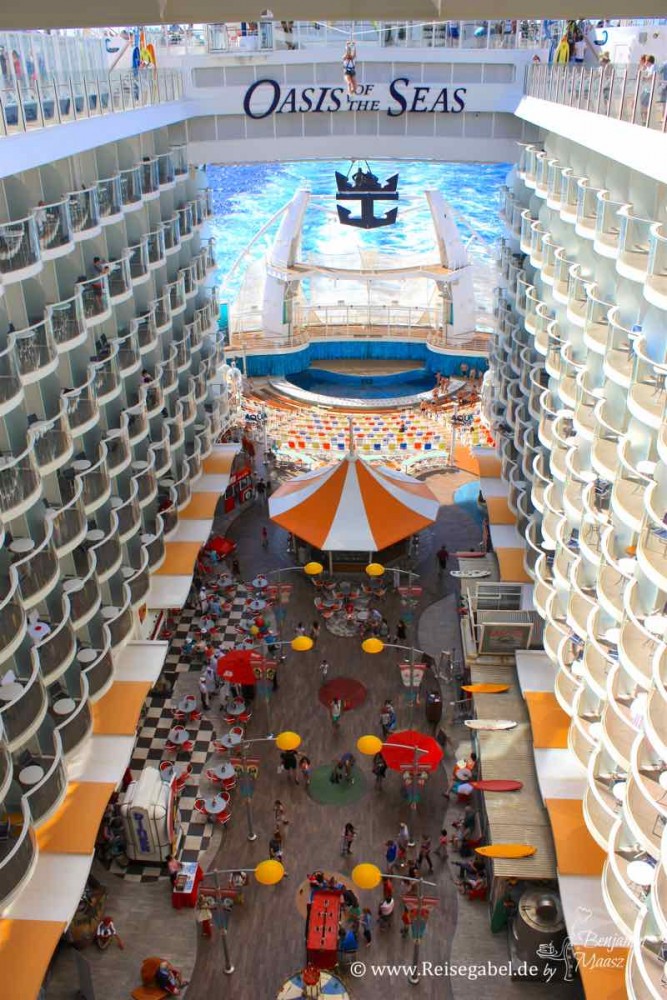 Entertainment Place is the nightly entertainment mile. On deck 4 under the Royal Promenade, are the Casino, Studio B ice rink and different clubs located. 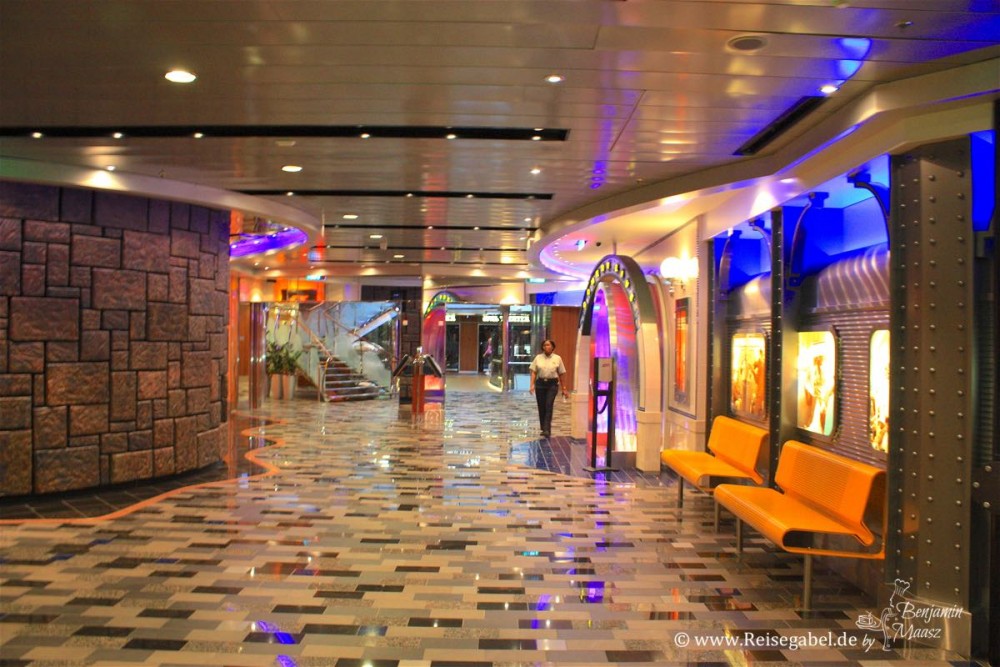 Adventure Ocean is located on deck 14 forward in the ship. Here’s entertainment, games and fun for children of all ages. From toddlers to teenagers.
Central Park, not only the green lungs of New York. Central Park is located on Deck 8 in the middle of the ship on board. He is framed as well as the Boardwalk with left and right balcony cabins. Here you will find a variety of restaurants, where you can sit outside in the green and almost forgets that you are on a ship. The Rising Tide Bar makes in certain intervals stop in Central Park to take new guests and go back down to the Royal Promenade. 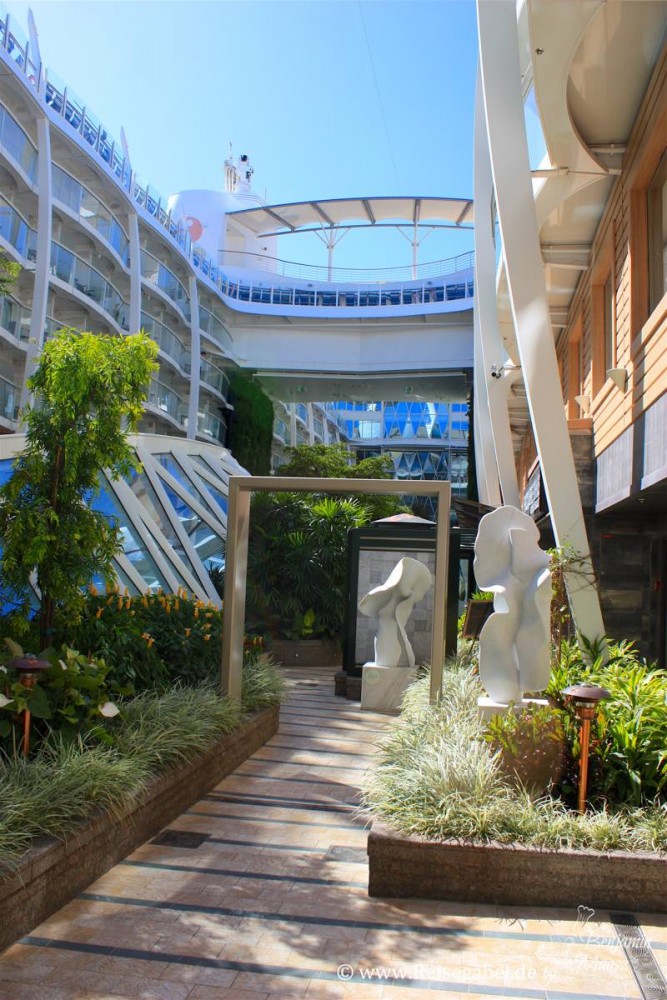 The Pool & Sports Zone covers Deck 15 over the entire length of the ship. In addition to various pools there are also splashing areas for children. In the rear of the ship, there is a mini golf course and a basketball court. A Deck higher you can learn surfing on the “FlowRider” or float with the “ZipLine” 25 feet high across the Boardwalk. In the front part of the deck 15 and 16 you will find the solarium. The area with pools and relaxing zones are only for adults and includes a buffet restaurant. 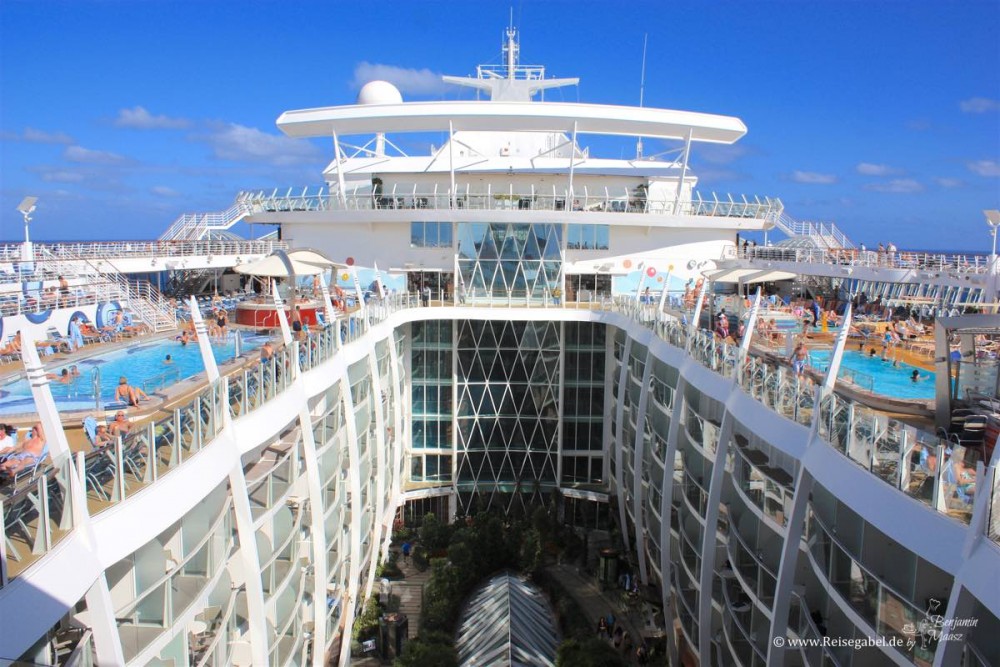 The Vitality Spa located at the front of the ship on the decks 5 and 6. There you can relax with a massage, go for gala evening hair style or train against the delicious food in the gym.