Highway 1 is a true highlight in good weather.

After one night in Monterey we continued our trip from San Francisco to Los Angeles. The schedule was very tight, but it was clear to us from the beginning. Either you have to emphasize some or you have some stress. We opted for the more stressful variant.

The plan for the day was therefore to drive from Monterey to Los Angeles on Highway 1. After some research on the Internet the route after Monterey should be the most beautiful. The plan was also that we then take Santa Barbara and Malibu along the way. But to say it at the beginning, in the end we make a different route.

Thanks to the not made notes, I can not say exactly when we are starting the trip, it was just as bright that you could see everything. The early rise was unfortunately not completely avoidable, because the route is quite long and you indeed can not drive so fast.

We have lost already at the beginning more or less the schedule, because you want to stop really on every little parking bay on the side. Always with the feeling you missed something. 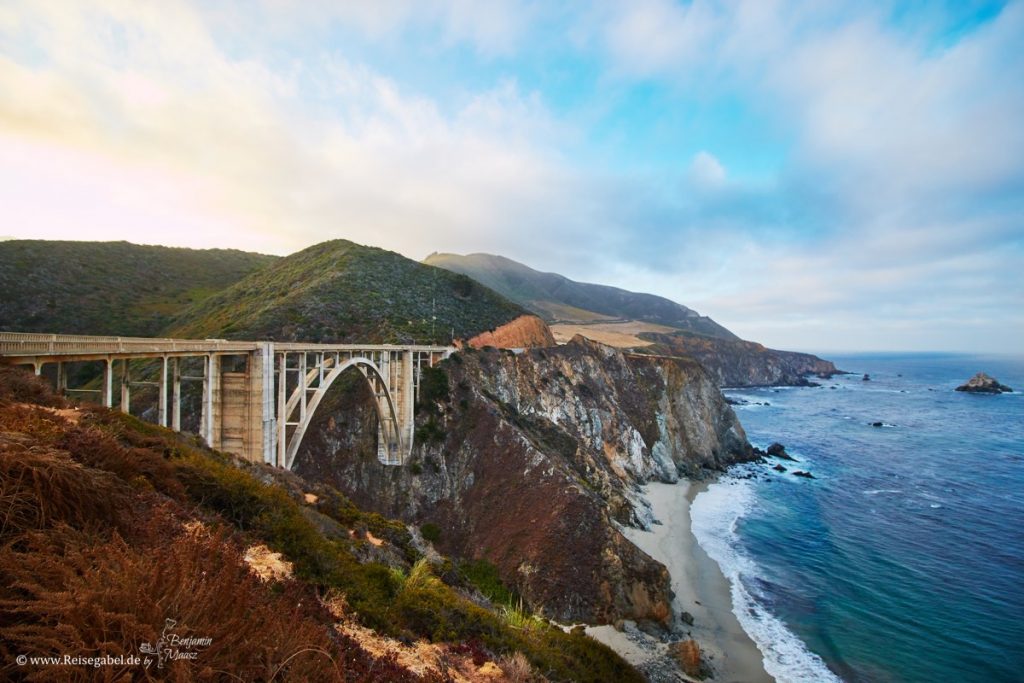 After the sun came out and the first few miles were driven we were happy. We should have the whole day great weather, which is not always given on Hwy. 1. It is great fun to drive the curvy and mountainous route (at least for me, my wife was not so impressed 😉 ) and at every turn there was a new thing to see. The highlight was then at a higher point. We are normally driven into the parking lot and it was a couple on the spot. They looked very curious on the ocean. We then realized quite quickly why, there were some whales. At least 9 whales cavorting close to the coast and had breakfast there. The couple had disappeared quite quickly and so we stood there alone in the morning sun and have observed the whales. Wow.

Despite all the planning we were not so concerned with the lunch, and have to go buy in the middle of nowhere in a small shop a great sandwiches for the microwave. That with the microwave, we have only understood after we had looked in the package. After warming up in the microwave it actually smelled delicious, but unfortunately just only smelled.

The beginning of the track was really the most beautiful, the closer we got to the south the views getting more unexciting. As of Highway 1 will no longer be led directly along the coast and we had enough of everything, we make the decision to take another route to arrive at quicker. Actually we wanted still take Malibu, but the traffic give us later the rest. The closer we came to Los Angeles, the more traffic we got.

Spontaneously, we got to the Hollywood Boulevard. But about this in a different post more soon. After the short visit we went to Anaheim. There we moved into our motel room which was just 15 minutes walking distance from Disney. Thanks to the Wyndham reservation site I had reserved 3 rooms in the motel and each about 600 $. Of course I wanted only one, and the nice lady has cancelled the other two. I still thought it was a stupid accident, but this situation should often happen in this vacation. The evening we end with a sumptuous meal at the Cheesecake Factory and fell quite early and totally exhausted into bed.